BioTfueL® project: entry into the industrialization and commercialization phase

Bionext and its partners have just successfully completed the test program on BioTfueL® demonstration units, a crucial step in the development of this technology that will allow the production of low carbon footprint biokerosene. This demonstration made it possible to validate, develop and optimize the process chain on a semi-industrial scale on 4 different types of biomass after 1000 hours of gasification and more than 1500 hours of torrefaction.

This success paves the way for the industrialization of the torrefaction-gasification-Fischer-Tropsch synthesis chain for the flexible production of sustainable alternative fuels for aviation as well as road, sea, and rail transport from lignocellulosic biomass. 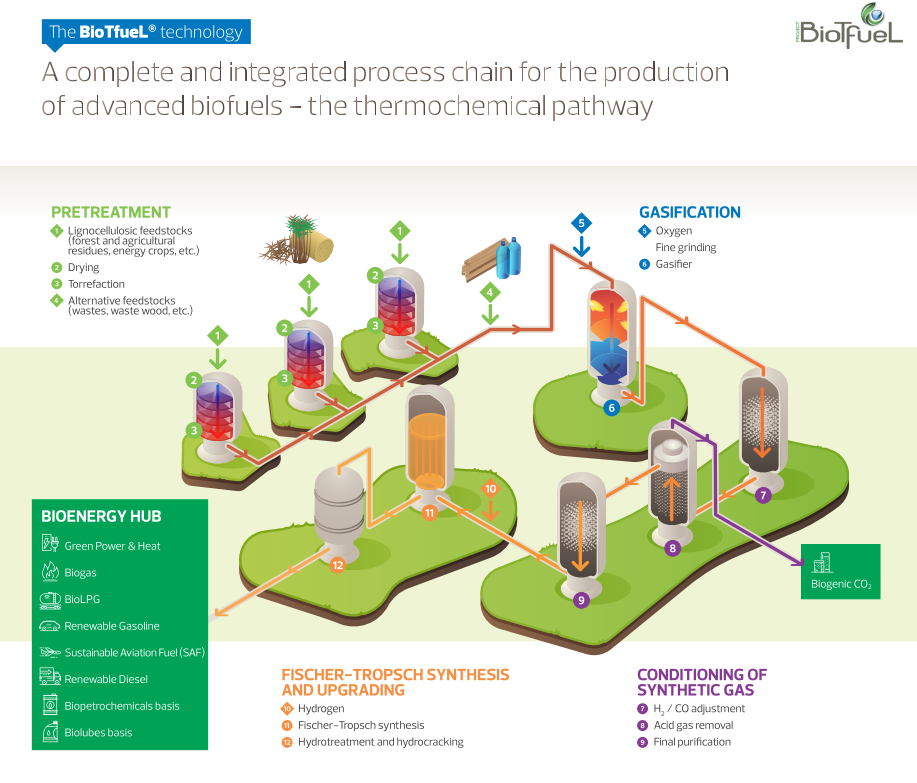 Based on the experimental results obtained, the partners are already hard at work to industrialize the BioTfueL® technology with a view to its commercialization in early 2022. This is an important step aimed at positioning BioTfueL® technology as the great option to produce Sustainable Aviation Fuels (SAF) allowing to reduce GHG emissions by more than 90%. Bionext will actively promote the development of the technology through licensing and basic engineering packages commercialized by Axens. Axens will be the market facing arm of the consortium.

The consumption of kerosene in France amounts to nearly 7 Mt / year, while it is of the order of 60 Mt / year in Europe; BioTfueL® technology will contribute by its deployment to the achievement of the SAF incorporation targets set by the French State in 2020 and proposed by the European Commission in 2021 in its " fit for 55 " package, which is 5% in 2030 and more than 50% by 2050. Each BioTfueL® industrial unit would allow the production of 30 to 100 kt / year of SAF and would create several hundred agricultural, forestry and industrial jobs.

An innovative process with optimized performance

BioTfueL® technology, whose demonstration units are located in Venette for torrefaction and Dunkirk (both in Hauts-de-France Region, France) for Syngas production and Fisher-Tropsch, is built on four key industrial process steps: torrefaction of biomass, gasification, treatment and purification of the produced synthetic gas and subsequent conversion into advanced biofuels via Fischer-Tropsch synthesis.

BioTfueL® 's innovative concept hinges on its capacity to process a broad spectrum of lignocellulosic biomasses, not competing with food applications. Thanks to its broad variety of potential feedstock, BioTfueL® technology can be deployed anywhere in the world. This flexibility will facilitate the yearly supply of any future industrial units and a potential reduction of its production costs.

The synergy of an industrial partnership

The BioTfueL® project was launched in 2010 with the ambition of testing, validating and optimizing a completely integrated chain to produce advanced biofuels. The program has been supported by the Bionext partners, by the French government via a subsidy of ADEME (France) and its Research Demonstrator Fund, the Hauts-de-France region and European Community via the European Regional Development Fund (ERDF) and by the French association of oil seed producers via the FASO fund.

The project is driven by Bionext which coordinates the expertise brought by its six partners and shareholders: research organizations (IFP Energies nouvelles and the CEA), technology providers (Axens, Thyssenkrupp Industrial Solutions) and industrial players (Avril, TotalEnergies).

« Based on these very promising achievements, several companies in the world have already expressed strong interest in commercial applications. The consortium is working on several studies for future industrial plants, based on local biomasses. The first industrial unit will be the next key step in positioning the BioTfueL® technology as the leading route for biojet fuels with very low carbon footprints » says Laurent Bournay, General Manager of Bione