A special issue of the ChemCatChem journal shines the spotlight on the contribution made by women to catalysis research. A perfect opportunity to examine the important role they play at IFPEN.

In August 2019, the ChemCatChem scientific journal published a special issue on women in catalysis. Its aim is to highlight the breadth and depth of the outstanding research in this field developed by women, and to raise their profile within the catalysis community.

One of those women whose work is covered is Céline Chizallet, project manager in IFPEN’s Catalysis, Biocatalysis and Separation Division. 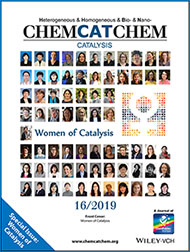 All three women are also actively involved, alongside other IFPEN researchers, in the organization of national and international conferences: the annual GECat conference and the triennial French Conference on Catalysis (FCCat), the 2nd edition having taken place in June 2019.

Moreover, they are currently busily working on preparations for France’s application to host ICC 2024 (International Conference on Catalysis) in Lyon.

The contribution of these scientists illustrates IFPEN’s pivotal and unifying role in the field of fundamental catalysis research nationally, and in terms of spearheading the influence of this community on the international stage. In particular, lFPEN’s activities help maintain dynamic links with French teams of the highest international caliber in the field.

The excellence of catalysis research at IFPEN is also reflected in the many prizes awarded in recent years to PhD students and researchers based in the Catalysis, Biocatalysis and Separation Division.

- Special issue of the ChemCatChem journal on the 2016 FCCat and special issue to come for the 2019 FCCat.
- Article on "Atomistic Models for Highly‐Dispersed PtSn/γ‐Al2O3 Catalysts: Ductility and Dilution Affect the Affinity for Hydrogen".