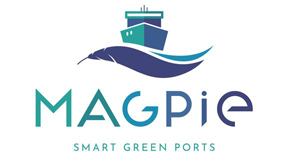 On Thursday, 10 March, the MAGPIE consortium organized the MAGPIE Start Conference. It was our first dissemination event. The one-day conference hosted 17 speakers and 45 organizations members of the EU-funded consortium, as well as several external partners.

The members of the MAGPIE consortium are set to embark on pilot projects in three key areas:
•    Alternative fuels and decarbonization of shipping
•    Smart technologies applied to port operations
•    River and rail connections with the hinterland

The content of the Work Packages and a range of demonstration projects were discussed at the event. These Work packages and demonstrations aim to accelerate and maximize green transport in the port area and thus strengthen the role of ports in the energy supply chains. Representatives of the EU Commission, the EU Parliament and the European Sea Ports Organization (ESPO) gave presentations on how the MAGPIE project connects to the EU Green Deal and how it will impact civil society. The Youth was represented by students from Erasmus University Rotterdam and Delft University of Technology, who were an integral part of the conference to give their feedback for this project and its impacts on their future.

The ports of Rotterdam (the Netherlands), Haropa (France), Sines (Portugal) and Deltaport (Germany) are supporting the project and are committed to replicating the innovations in their own port communities.

We want to shape the green ports of the future. MAGPIE’s ambition is to force a breakthrough in the supply and use of green energy carriers in transport to, from and within ports. By demonstrating and implementing smart solutions in the realm of digitalization and automation, we will facilitate and contribute to the decarbonization of port-related transport.

The AIVP – the international association of port cities - is the main dissemination partner of the MAGPIE project.

IFPEN teams will contribute to the Magpie project by developing digital twins and interactive dashboards in order to create and visualize emission inventories in port cities by drawing on their expertise in the microscopic modeling of pollutant emissions."

About the MAGPIE project :

In this context, seaports will play a major role in boosting the use of cleaner technologies, green energy carriers and logistics concepts in maritime transport, port operations and hinterland transport (road, rail, barge, and pipeline) to reduce GHG emissions.

The Port of Rotterdam, the largest seaport in Europe with many transport connections for all modes of transport, is a frontrunner in the energy transition and has the vision to become a zero-emission port by 2050. Together with the fellow ports HAROPA, Sines and DeltaPort (which is an inland port) the Port of Rotterdam supports the European Green Deal sustainability goals.

Our project is carried out under the framework of call H2020-LC-GD-2020 entitled “Building a low-carbon, climate resilient future: Research and innovation in support of the European Green Deal”. This call is placed under the responsibility of the fund Horizon 2020.

Reducing sulfur emissions in shipping: an economic and technological challenge