The i-Clip-Riser® stands up to fatigue!

The i-Clip-Riser® is a technological product developed by IFPEN, which enables rapid connection of drilling riser componentsa offshore.

As a result of the weight of the assembly and swell movements, it is constantly subjected to fatigue stresses. A detailed analysis of these, based on non-linear numerical simulations, has demonstrated their multiaxial cyclical nature, which the conventional fatigue criteria reported in the literature cannot express.

In addition, it made it possible to quantify the impact of several dimensioning parameters, such as: 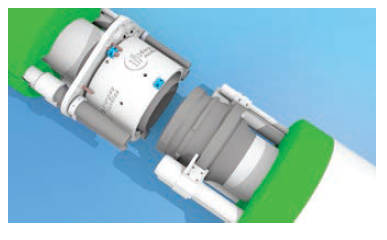 A fatigue endurance limit criterion, including only two material parameters, was defined on the basis of this large-scale testing program and was validated in all the conditions tested(2). Based on the Gerber approachc, it enables characterization of the resistance of the connector under the multiaxial loads encountered during operation. Easily usable for structure calculations, this enables a more realistic validation of the behavior of the i-Clip-Riser® in response to fatigue.

It is planned to extend this research to predict the life estimation, and also to perform validation tests on a prototype (scale 1:1).

a- A set of tubes, including one main pipeline, connecting the drilling platform to the subsea wellhead.

b- Scanning and transmission electron microscopy.

c- Approach that expresses the effect of mean stress on the endurance limit under uniaxial tension.