To find out more about  Rock-Eval® 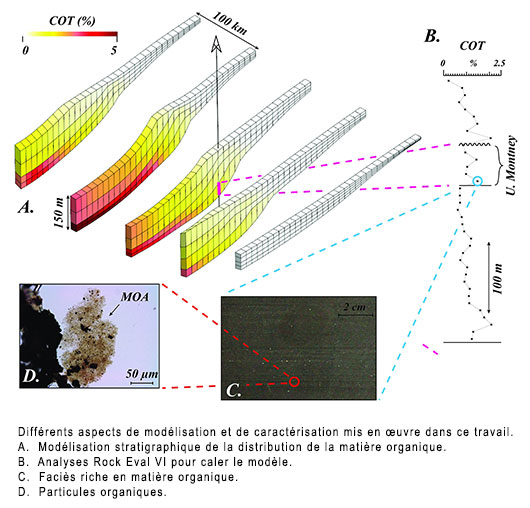 Different analytical methods are recommended depending on the application field:

1.    The « Bulk Rock » method is described, for example, in Lafargue et al. (1998) and Behar et al. (2001). The temperature sequence for this method is generally characterized by an initial pyrolysis oven temperature of 300°C, a temperature that is kept constant for a pre-determined period of 3 minutes. It is during this phase that free hydrocarbons, initially contained in the rock sample, are released. Their quantity is estimated by measuring the surface area of a first peak, denoted S1, using a flame ionization detector. Then, the pyrolysis temperature is gradually increased until it reaches a temperature of 650°C in general. During this phase, the volatilization of the heavier hydrocarbon compounds and the thermal hydrocracking of non-volatile organic matter take place. The quantity of hydrocarbon compounds released during this phase is estimated by measuring the surface area of a second peak, denoted S2.

2.    The « Reservoir » method, dedicated more particularly to oil and reservoir rock samples. The temperature sequence for the “Reservoir” method is characterized by an initial pyrolysis oven temperature preferably equal to 180°C. This temperature is maintained for a pre-determined period of 10 minutes during which light hydrocarbon compounds are volatilized. Their quantity is calculated my measuring the surface area of a first peak, denoted S1r, detected by the flame ionization detector. The temperature of the pyrolysis oven is then increased to a second temperature of 650°C. During this phase, heavier hydrocarbon compounds are either volatilized or cracked. Their quantity is calculated by measuring the surface area of two other peaks: the peak denoted S2a for a temperature of between 180 and 370°C, and the peak denoted S2b for a temperature of between 370 and 650°C.

3.    The « Shale Play » method  dedicated more particularly to the characterization of source rock hydrocarbons is described in Romero-Sarmiento et al. (2016a; 2016b, 2019). The temperature sequence for the “Shale Play” method is characterized by an initial pyrolysis oven temperature preferably equal to 100°C. This temperature is then raised to a second temperature of 200°C and maintained for a pre-determined period of 3 minutes; the quantity of light hydrocarbon compounds below 20 carbon atoms is estimated by measuring the surface area of a first peak, denoted Sh0. The temperature of the pyrolysis oven is then increased to a third temperature of 350°C. During this phase, the quantity of heavier hydrocarbon compounds released is estimated via the estimation of the surface area of a second peak, denoted Sh1. This phase corresponds closely to the end of the thermovaporization of some hydrocarbons and the start of cracking by pyrolysis of the heavy compounds. Then the pyrolysis temperature is increased once again until it reaches a fourth temperature, generally 650°C. The surface area of a third peak, denoted Sh2, representative of hydrocarbons derived from the thermal cracking of kerogen, is estimated during this third heating phase.

In the field of oil exploration, different parameters and indices from the Rock-Eval® analysis are interpreted for the evaluation of source rocks as well as oil and gas reserves.
The “Bulk Rock” method gives access to the organic carbon content (TOC) and mineral carbon content (MinC), as well as miscellaneous indices used for oil exploration (S2, Tmax, HI, OI, SI, PI):

•  The COT parameter, representing the rock’s total organic carbon content, is expressed in grams of organic carbon per gram of sample x 100 (mass percentage). It is a fundamental parameter, being the first target property to be quantified when evaluating a rock’s organic matter concentration. In the field of oil exploration it indicates the presence of a potential source rock and its richness.

•  The MinC parameter, representing mineral carbon content, is expressed in grams of mineral carbon per gram of sample x 100 (mass percentage). It can be translated into calcite (CaCO3) equivalent by applying the following formula:

•  The S2 parameter corresponds to the hydrocarbons released by the organic matter (kerogen) during pyrolysis between 300°C and 400°C and is expressed in milligrams of hydrocarbons per gram of rock. In terms of geological conditions, it represents the quantity of hydrocarbon compounds that would have been generated by the source rock if it had been heated to a sufficient temperature for long enough for its organic matter to crack and generate hydrocarbons. In oil exploration this parameter is referred to as “oil potential” (Espitalié et al. 1977). 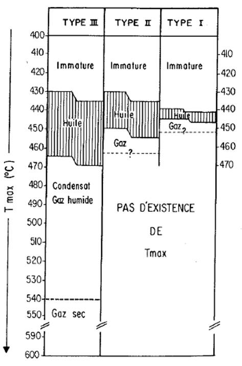 •  The Tmax parameter, a linear function of the S2 peak maximum temperature, is expressed in degrees Celsius. In oil exploration, it is interpreted in terms of the level of thermal maturity of the source rock’s organic matter and, in practice, is used to determine oil and gas production zones (Espitalié et al. 1985[b]).

•  The HI (Hydrogen Index) is the ratio between S2 and TOC and is expressed in milligrams of hydrocarbons per gram of organic carbon x 100:

•  The OI (Oxygen Index) is the ratio between S3 and TOC and is expressed in milligrams of CO2 per gram of organic carbon x 100:

In oil exploration, the HI and OI values are proxies of, respectively, the hydrogen and oxygen contained in the kerogen fraction capable of generating oil and gas. These are useful parameters because the higher the hydrogen content of a kerogen the greater its capacity to generate high-quality oil. Moreover, an immature hydrogen-rich kerogen is generally derived from algae and microorganisms living in fresh water. In contrast, the higher the oxygen content of a kerogen, the lower its capacity to generate oil and the poorer the quality of the oil generated.  Moreover, an immature oxygen-rich kerogen is often derived from higher terrestrial plants. Kerogens with intermediate hydrogen and oxygen contents, on the other hand, are often derived from marine algae and microorganisms. Accordingly, it is possible to establish graphical plots of kerogens according to their origin, without the need to chemically extract them from the rock, by simply using a diagram (HI, OI) generated by a Rock-Eval® analysis of the bulk rock. This diagram has been known as a “pseudo-Van Krevelen” diagram, after the chemist who developed it.

In addition, an HI-Tmax diagram can be used to interpret the maturity of kerogen as a function of its type. Lastly, an S2-TOC diagram provides additional information concerning kerogen families within the same type. All three diagrams are widely used in oil exploration.

•  The SI (Sulfur Index) is only obtained with version 7S of the Rock-Eval® technology. It is defined as the ratio between S2orgS, which quantifies the sulfur released by organic matter during pyrolysis between 300°C and 400°C, and TOC. It is expressed in milligrams of SO2 per gram of organic carbon x 100:

•  The PI (Production Index) is the ratio between S1 and S1+ S2 and is expressed in grams per gram of hydrocarbons x 100:

This parameter characterizes the state of evolution of rock organic matter by providing an indication of the quantity of hydrocarbons still present in the source rock (S1), relative to the pyrolyzable organic matter of this rock (S2). Since S1 comes from S2, S1 increases as S2 reduces if the system remains closed. Based on this principle, the production index also makes it possible to define the levels of the source rock from which oil (S1) has been expelled to drainage rocks, in the case of an open system. The PI ranges between 5% for immature source rocks and 60 - 100% for very mature source rocks.

•  The Hydrocarbon Content parameter (HCcont) is calculated from Sh0 and Sh1 signals obtained at between 100°C and 350°C and is expressed in milligrams of hydrocarbons per gram of rock:

It corresponds to the quantity of thermovaporized hydrocarbons and thus provides an estimate of the total free and adsorbed hydrocarbons present in the rock.

•  The HQI parameter (Hydrocarbon Quality Index) is also calculated from Sh0 and Sh1 signals obtained at between 100°C and 350°C and is expressed in terms of mass percentage:

•  The PIShale parameter (Production Index for source rocks that are rich in liquid hydrocarbons) is calculated from the three Sh0, Sh1 and Sh2 signals as follows and is expressed in terms of percentage mass:

Rock-Eval® : history of a process, applications, the method