The present page presents the benefits of TRUE AMPLITUDE seismic reflection from VSPs for the geologist interpreter. Additionally, a method for the detection and quantification of INTERNAL OR INTERBED MULTIPLE REFLECTIONS from the VSP is exposed on a near 1D field case study, defining the physical limitations of surface seismic, in order to warn the interpreter and the surface seismic processing geophysicist.

The VSP method involves recording the seismic signal by a sensor located in a borehole, from which an incident downgoing seismic signal generated on surface is followed by upgoing signals reflected below the borehole sensor.

It looks surprisingly easy and robust to extract the amplitude and phase of seismic reflection  when processing a VSP dataset , at least in the corridor stack domain and in the limited frequency range of the incident downgoing signal reduced to a desired zero phase pulse by the common “wave shaping”, or “signature” deconvolution process commonly used by all industrial and academic VSP processing geophysicists since its first introduction by seismic pioneer Nigel Allistair Anstey, through his founding 1976 patent GB 1 569 581-ANSTEY.

Actually, the digital deconvolution of VSP’s was applied immediately after VSP data started to be field recorded in digital form, around 1975. The famous article Reflections on Amplitude in surface seismic was previously published in 1971 by the same geophysicist N.A. Anstey with his colleague O’ Doherty R.F.

At processing, highly precise algorithms are used today, although the order of VSP processing operations can be revised: for instance, the geometrical spreading compensation operation should preferably be applied BEFORE wave field separation, and AFTER deconvolution, in order to correctly compensate for the propagation effects on a pulse VSP earth response dataset. The processing fidelity plays a major role on the quality and reliability of the seismic reflections in the VSP processing results. A true amplitude VSP processing procedure is described in US patent 2003/0086335 A1 by Naville, C., illustrated by a 1D VSP field case study. In order to further simplify the common VSP processing procedures to obtain true amplitude VSP reflections, an alternative processing route is proposed as follows: 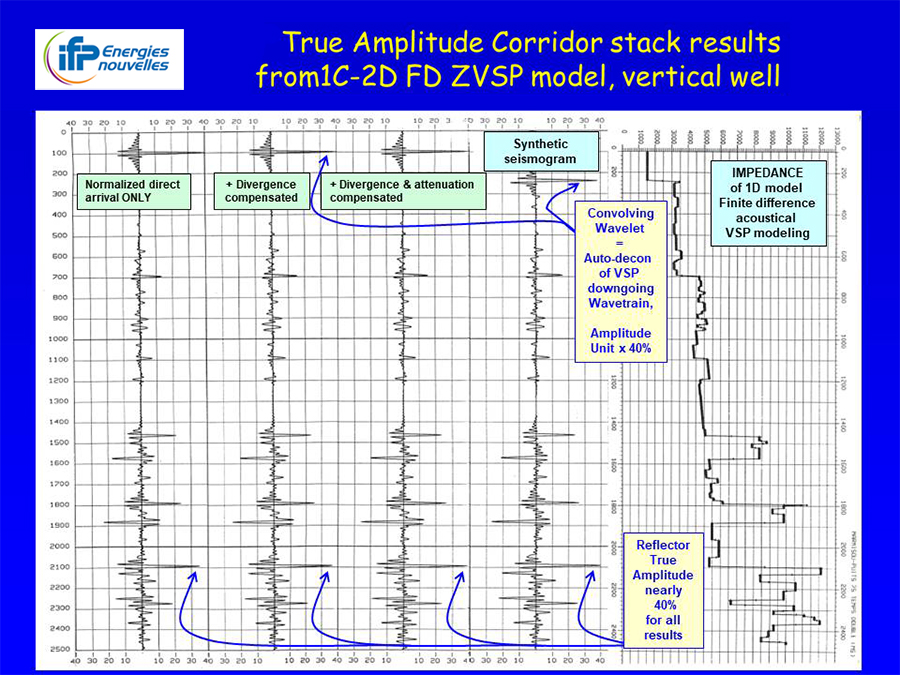 On the above figure, the peak amplitude of the zero phase pulse has been reduced to 40% in order to facilitate the comparison with the deep reflection amplitudes.

One can appreciate the reliability of the True amplitude VSP processing procedure as the fully compensated reflection VSP corridor stack in track c) is near identical to the synthetic seismogram in track d), in spite of totally different processing routes. When no amplitude correction is applied, on VCS-track a), the reflection amplitudes are lower by only 10% than the true amplitudes, although the 100ms time window retained for the corridor stack domain was quite large, and the reflection amplitudes do not change significantly relatively to each other.

The above example indicates that the industrial practice of synthetic seismogram construction, from sonic log calibrated with VSP times, and preferably with density log, can easily yield true amplitude modeled reflections within the frequency band associated with the convolutional wavelet, to be compared with the true amplitude VSP corridor stack in a similar frequency band; thus, the seismic reflection amplitudes from both borehole seismic methods can be analyzed and interpreted with higher accuracy and pertinence.

B- Detection of INTERBED MULTIPLES from VSP; case study of multiple elimination on a field VSP

The following presentation document : Internal multiple from VSP-Overview  explains the generation principle of seismic interbed multiples between two horizontal reflectors on a VSP dataset recorded in a vertical well with a surface source located near the wellhead, and the preprocessing route for the fine detection and characterization of interbed multiples from the downgoing VSP wavetrain.

The surface seismic imaging case study of a 2D line combined with a VSP located on the line is illustrated in the following presentation document: IFPEN-TAQA-Canada_internal multiple from VSP. A dedicated processing analysis of VSP data evidenced TWO coinciding observations about the seismic propagation through and surrounding a coalbed:
i) drastic attenuation of high seismic frequencies above 60Hz associated with a substantial phase rotation of the seismic signal transmitted through a 12m thick coalbed,
and ii) interbed multiples between top of coalbed and strong reflectors located above the coalbed; curiously, interbed multiples expected between base of coalbed and strong underlying reflectors are not clearly observed…

After detection and quantification, the complex interbed multiples between top of coalbed and strong reflectors above it have been tentatively eliminated using an innovative deterministic deconvolution approach on the VSP dataset, showing a net success for the true reflector response recovery of the reflectors located immediately beneath the coalbed, and a mitigated success in the deeper targeted interval.

In addition, the observations derived from fine VSP data analysis have been used to design a dedicated anti-multiple processing procedure for surface seismic data, enabling a substantial mitigation of the damaging effects induced by the presence of a coalbed in the lithological column, which drastically distorts the seismic image of reflectors in the underlying reservoir interval; however, high frequencies above 60Hz are definitely lost in surface seismic for all the targeted reflections underlying the coalbed.

The tested application consists in a two-gate predictive or spiking deconvolution, with operators independently computed above and below the top coalbed reflection; this procedure would be preferably improved by a modern surface consistency feature. It constitutes an innovative anti-interbed multiple procedure at prestack stage; although the processing adjustments and time gate guidance is implemented in most of the industrial seismic processing packages, the design of the different time computation windows can deeply impact the quality of the end seismic image. Incidentally, these conclusions are very similar to the ones obtained independently in the same time period around 1996 by Craig A. Coulombe and D. Neil Bird in their borehole seismic study in a well located West of Edmonton, entitled: Transmission filtering by high-amplitude reflection coefficients.

Using the true amplitude VSP corridor stack as the seismic response of the subsurface in a gently dipping structural context is a reliable manner to guide, check and confirm the technical soundness of the surface seismic processing results. The transmission operators computed from the downgoing VSP wavetrain exhibit accurately the frequency losses and the complex interbed multiples associated with a mix-phase rotation, however locally to the well. Therefore, the surface seismic deconvolution parameters must be carefully adapted to the dataset to be processed, knowing that the geometrical and physical characteristics of the coalbeds responsible for the phase distortion and transmission losses may vary laterally to the well. Unfortunately, the downgoing wave train of VSP’s is not thoroughly studied by the VSP processing industry on one hand, and usually ignored by the surface seismic processing industry on the other hand…

Lastly, the additional information derived from the VSP dataset processed in true amplitude manner is exposed in the following Appendix presentation file:
IFPEN-TAQA-Canada_VSP-appendices, including:

Appendix-A: borehole logs and true amplitude seismic seismograms compared with true amplitude VSP-Corridor Stack ; correction of the recorded gamma-gamma density log by the density value derived from the VSP-Corridor Stack and sonic log, mainly where large caves are present in the borehole, where the density log measurements are drastically altered, as observed in front of the coalbed and in the immediate proximity of a few caved layers.
In addition, the corrections of the measured density log made by interpolation over the caved depth interval are shown to be generally inaccurate. The above remarks indicate that the TRUE FORMATION DENSITY can be restituted in caved intervals by inverting a true amplitude VSP-Corridor Stack into impedance, then removing the effect of the sonic log value variations versus depth from the acoustical impedance inverted from VSP.

Appendix-B: ancillary information from the 3 components (3C) of the near zero offset VSP after orientation:

Appendix-C: Frequency analysis of the P-P reflected true amplitude VSP Wavefield, using bandpass time filters on adjacent frequency bands. The images of filtered signals are displayed twice, first in true amplitude relatively to other frequency bands, and secondly after equalization, so as to facilitate the visual appreciation of signal amplitudes and Signal to Noise ratio (S/N) in each frequency band. This visual frequency analysis method reveals that the seismic reflections from underneath the coalbed, well identified on the VSP-Corridor Stack and on the logs, are TOTALLY attenuated above 60Hz when the VSP receiver tool is located above the coalbed. Consequently, the high frequencies above 60Hz are IRREMEDIABLY LOST for surface seismic for targets located below the coalbed, because of physical limitations of the seismic propagation through coal, independently from the recording technology and the field parameters, or from the geometrical survey design.