Start-up of the "3D" Carbon Capture Pilot in Dunkirk

The "3D" industrial pilot to demonstrate an innovative process of CO2 capture from industrial activities is now running at ArcelorMittal’s Dunkirk site. With support from the European Union’s Horizon 2020 Research and Innovation program and the ADEME (French Government), the project aims to validate replicable technical solutions for carbon capture and storage. The "3D" project driven by a consortium including ArcelorMittal, Axens, and IFP Energies Nouvelles (IFPEN) and TotalEnergies, is a major step towards decarbonizing industries that are highly emissive of CO2, such as steelmaking. 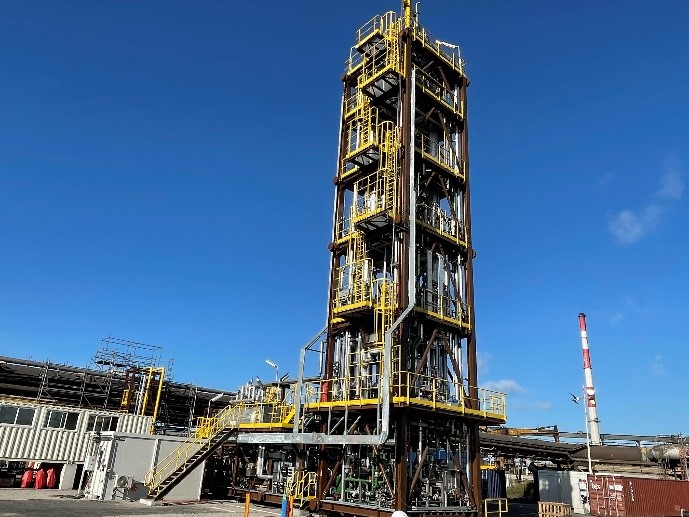 The challenge for carbon capture researchers is making the processes more competitive and less energy intensive. This industrial pilot should allow the performance of the DMXTM carbon capture process developed in IFPEN’s labs over the last ten years to be verified. The project was launched in May 2019, and the building of the demonstrator began in 2020 under Axens’ supervision. Last December, the pilot’s main modules, including a 22 meter tower, were delivered and assembled at ArcelorMittal’s site in Dunkirk. The phases of building the pilot and connecting it to the plant have now been completed, and the unit is ready for start-up.

This demonstration, which is scheduled to last for 12 to 18 months, is the final stage before the technology’s full-scale deployment.

The carbon capture facility will process steelmaking gases at ArcelorMittal’s Dunkirk facility: it will demonstrate the effectiveness of the carbon capture process by separating the CO2 from other gases. The pilot is capable to capture 0.5 tons of CO2 an hour, i.e. more than 4,000 tons a year.

The emissions are first sent through two 20 meter columns containing a chemical "demixing" solvent which separates and captures the CO2: this solvent is key to the technology, which has proved its effectiveness, energy efficiency, competitiveness and sustainability. A third "regeneration" column recovers 90% pure CO2 at the end of the process.

Clearing the next hurdle at Dunkirk

The 3D project team is also preparing for the stages following demonstration and leading to the technology’s deployment:

•   Preparing for the set-up of a first industrial unit at ArcelorMittal’s Dunkirk site, which could be operational by 2025. The unit will capture some 125 tons of CO2 per hour, amounting to over one million tons per year.

•  Designing the future European hub Dunkirk-North Sea, which should have sufficient capacity to capture, package, transport and store 10 million tons of CO2 per year and is expected to start operations by 2035.
Transporting CO2, either by pipeline or by ship, should allow it to be permanently stored in former gas fields or deep saline aquifers.

Transporting CO2, either by pipeline or by ship, should allow it to be permanently stored in former gas fields or deep saline aquifers.

11 partners committed to the energy transition
Carbon capture and storage is a vital driver for reaching the targets of the Paris Agreement on Climate Change. The 3D project includes 11 partners from research and industry in six European countries: ArcelorMittal, IFPEN, Axens, TotalEnergies and its affiliate GreenFlex, ETH, DTU, AirProducts, John Cockerill, Gassco, Brevik Engineering and Uetikon. The project also has two sponsors: Suez and Lhoist.

Innovation and Industry
News
May 2019