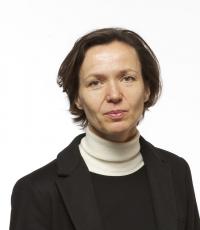 Mickaele Le Ravalec holds a Ph.D. degree in rock physics from the University of Rennes (1995) and a HDR from the Louis Pasteur University of Strasbourg (2002).

After a post-doctoral position in rock physics at Stanford University, USA, she joined IFPEN (formerly named Institut Français du Pétrole, known today as IFP Energies nouvelles) as a research engineer in 1997. Her main research interest is geomodeling, which involves geostatistics, inverse problems, data integration or uncertainty among others. The combination of these various fields makes it possible to build numerical models used in hydrology or reservoir engineering to represent geological formations and study how fluids flow underground.

Mickaele has been leading several projects since 2005. She was named IFPEN expert in 2010 before occupying the position of head of the Geology Department in 2014, then of the Georesources Department in 2016. She also spent one year in an operational team from Total.

Mickaele has been a member of CNE2 (national Assessment Board for research and the studies into the management of radioactive wastes and materials) since 2016 and was named vice-president in 2020. CNE2 is in charge of the annual evaluation of the research works performed about the management of nuclear wastes in France. This assessment results in an annual report being written for the French Parliament, which is submitted to the Parliamentary Office for the Evaluation of Scientific and Technological Choices (OPECST).

Mickaële is also a member, since 2017, of the Lyon Observatory Council, which consists of the  CNRS Astrophysics and Geology laboratories under the supervision of ENS Lyon. Since 2018, she is a member of the  Lyon Observatory Improvement Council. Mickaele was invited as a professor at INRS Quebec, Canada, from 2012 to 2015. Besides, she was a member of the EAGE Awards Committee from 2011 to 2014 and was named Vice Chair in 2013 and 2014.

In 2020, she is a member of the HCERES committee whose purpose is the evaluation of INERIS.

She has authored and co-authored 27 patents, 114 papers of which 48 peer-reviewed journal papers, 6 chapters in books, and 60 conference papers. She also authored one book, an e-book and co-edited a book. Since 2020, Mickaele is a member of the editorial committee of “CR Géosciences”, published by the French Academy of Sciences.

Mickaele Le Ravalec was awarded the Michel Gouilloud-Sclumberger Prize by the French Academy of Sciences in 2011. She was made a knight of the Legion of Honor in 2014.