CPC: fractionation that has oxygens in a spin!

IFPEN has been working on the development of innovative processes and catalysts for the conversion of lignocellulosic biomass into biofuels and bio-based molecules for over a decade. A detailed characterization of the composition of the products generated - both intermediate and final - is essential in order to achieve such an objective in an industrial context. Chemically speaking, these products are highly complex, often requiring an initial fractionation step prior to the analysis.

Among the approaches developed within IFPEN’s Physics and Analysis division, centrifugal partition chromatography (CPC) was recently studied by the Fluid Characterization Department’s Molecular Analysis team. The specific aspect of this technique is that it brings into play two immiscible liquid phases between which the constituent elements of a mixture are separated according to their partition coefficient. These two phases are kept in equilibrium thanks to centrifugal movement in several hundreds of cells interconnected via microchannels located within a rotor. This technique also requires the use of combinations of solvents that need to be carefully chosen to ensure its effectiveness.

There are numerous advantages associated with CPC:

In this study, 280 fractions were gathered using CPC fractionation of the bio-based oil in question before being individually reinjected (off line) using liquid chromatography, thus giving access to a genuine two-dimensional CPCxLC map of the sample. In this example of bio-oil, more than 252 peaks were detected by UV. As shown in the figure below, this 2D representation corresponds to a genuine ID card for the sample. This ID card makes it possible, at every point containing a peak, to provide detailed information about the corresponding compound, such as its molecular mass, its molecular formula or (when high-resolution mass spectrometry is used in combination with LC) the functions making up its chemical structure. It is thus thanks to the second analysis dimension it provides, making it possible to remove the ambiguities hitherto encountered with one-dimensional LC, that the first CPC fractionation step proves very beneficial. It should be noted that it also makes it possible to overcome matrix effects detrimental to mass spectrometry. It can also prove helpful when it comes to structuring chromatograms by chemical family type. 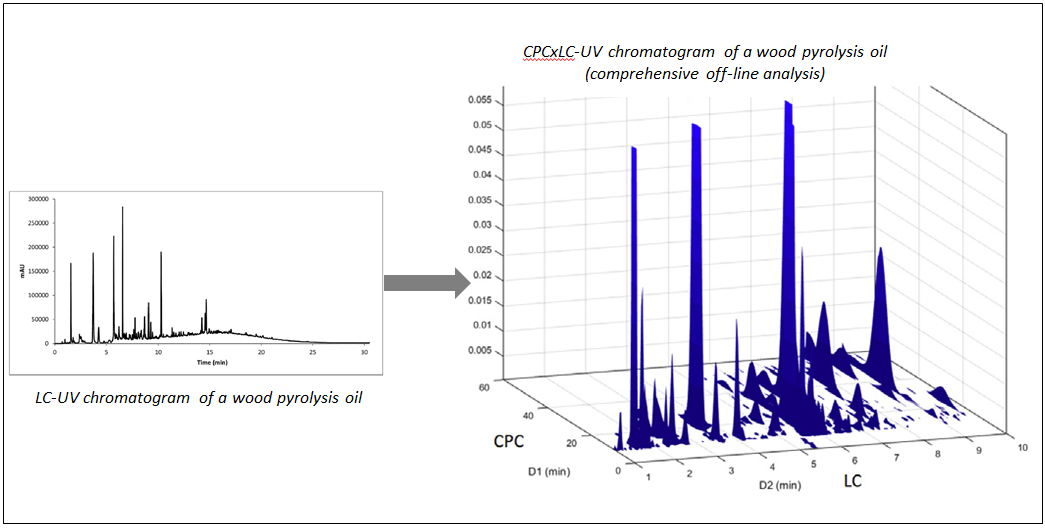 The CPCxLC combination paves the way for a new analysis and understanding approach adapted to complex samples, such as those that are increasingly the focus of research at IFPEN. It is for this reason that research projects are ongoing in this field, using equipment accessible via the Axel’One collaborative platform [3].

* chemical substance or product forming the focus of an analysis procedure

[3] Dubuis A., Le Masle A., Chahen L., Destandau E., Charon N., A combination of elution, displacement and extrusion modes in centrifugal partition chromatography as a first dimension of a comprehensive two-dimensional liquid chromatography: a unique approach for the analysis of lignocellulosic biomass products, article soumis.