For circulating fluidized beds, the time has come to control attrition

Within the context of PhD research being conducted with the University of Leeds and Total, IFPEN has developed a tool making it possible to predict particle attrition in circulating fluidized beds.  Ultimately, this tool should make it possible to select the solid metal oxide with the greatest capacity to transport oxygen for a promising process currently under development: chemical looping combustion.

Chemical looping combustion (CLC) is a promising combustion technique without the presence of nitrogen, reducing the energy penalty associated with CO2 capture.  This process, currently being developed by IFPEN and TOTAL, is operated in a circulating fluidized bed (CFB1), with the solid particles (metal oxides) - known as “oxygen carriers” - circulating from an oxidation reactor to a combustion reactor.

Generated in different zones of the CFB, attrition brings into play several mechanisms, governed firstly by the physical and mechanical properties of the particles, and secondly by the severity of operating conditions.  In addition, its impact on the performance of the process in industrial conditions is difficult to predict.  It is for these reasons that the phenomenon has been the focus of PhD research conducted at IFPEN [2], in partnership with Leeds University and Total.

The research has led to the development of a tool for predicting particle attrition in circulating fluidized bed.  In order to achieve this, the research teams established the link between single particle breakability up and the attrition generated in the process by the principal sources of this phenomenon, namely jets and cyclones.  The purpose of this predictive tool is to optimize the crucial selection of the solid metal oxide to be used as an oxygen carrier in the specific case of chemical looping combustion (CLC).

Estimating attrition in different zones of a CFB

In order to describe attrition in the region of gas jets and in cyclones, these results were correlated with those measured using laboratory and pilot-scale tools, for different particle properties (diameter, density, hardness, breaking strength) and operating conditions.  These correlations were then used to estimate attrition in different regions of a CFB.

Numerical simulations were also conducted by CFD-DEM4[3,4], as illustrated in the figure below:

The correlations established in the different attrition regions (on the left of the figure below) were then employed in a population balance model (PBM5) in order to simulate the dynamic behavior of a circulating fluidized bed, with solid make-up. 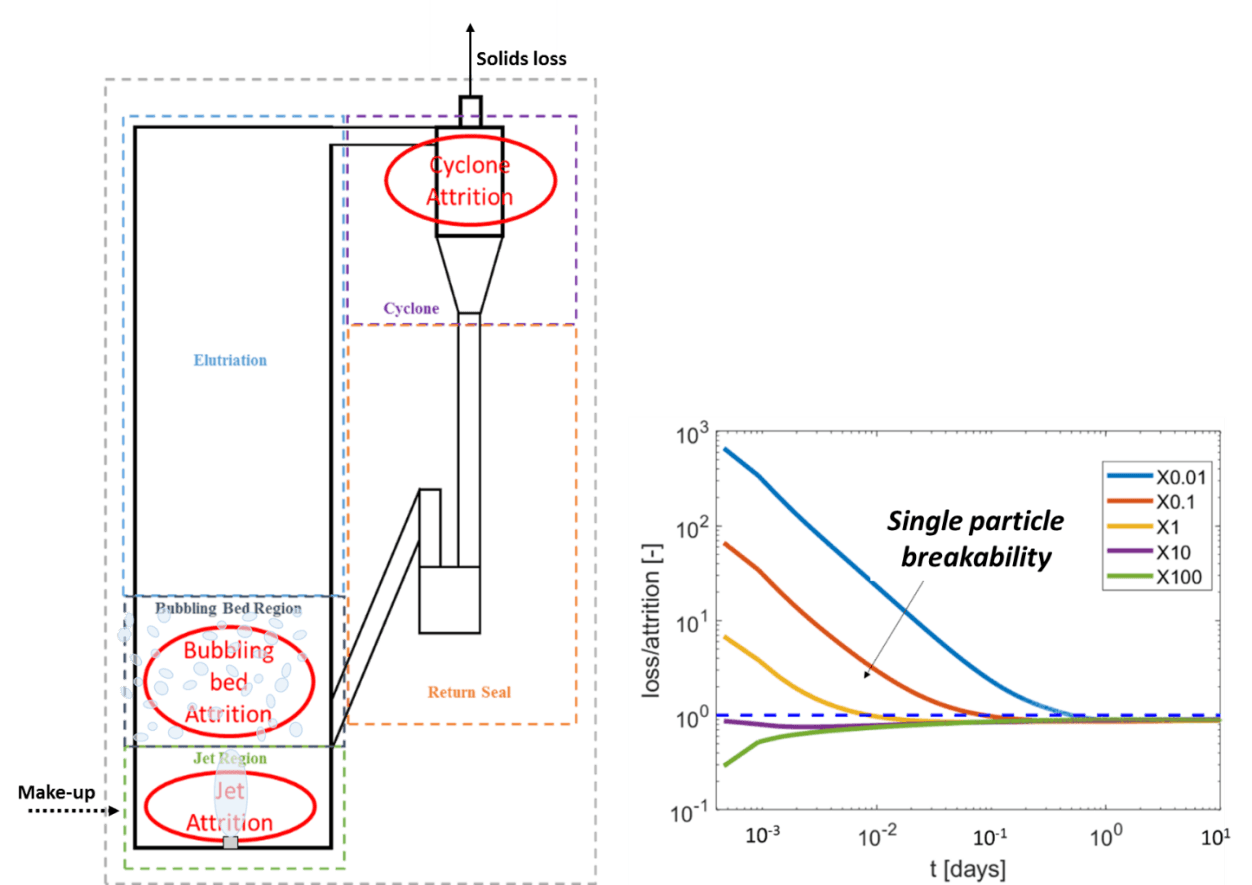