Everything you need to know about plastic recycling

Plastic is an integral part of our daily lives and consumption habits and continues to be produced in massive quantities, causing more and more waste. It’s a complex situation that has prompted a range of regulatory responses around the world. In France and in Europe, regulations are primarily focused on the key principles of the circular economy, and above all recycling. However, faced with the limitations of the mechanical recycling method currently used, attention is now turning to chemical recycling.

More and more plastic is being produced, consumed and thrown away

Much of this is packaging - 40% of plastics produced in Europe, Canada and the United States are used for packaging - which has a particularly short life span.

And what about the future? This figure is forecast to increase by 40% by 2030 and to double or triple by 2050, to more than1 billion tonnes per year. Nothing is lost; everything is transformed? Things aren’t that straightforward with plastic: it takes 10 to 20 years for a plastic bag to degrade, and no less than 450 years for a plastic bottle. Far from simply disappearing, the micro and nano particles produced by this natural degradation are the source of invisible pollution.

While it’s estimated that between 4 and 12 million tonnes of "large waste" (plastic bags, bottles, tableware) are dumped in the oceans every year (for a current total of 150 Mt of plastic), there are also several million tonnes of so-called "primary" microplastics, i.e. those manufactured to be smaller in size (less than 5 mm), generally for use in cosmetic or cleaning products.

In 2017, the United Nations reported that the ocean contained 51 trillion plastic particles; 500 times the number of stars in the galaxy.

Weakened by exposure to UV rays, large waste products also degrade to form secondary microplastics, which have been found in all aquatic environments: rivers, groundwater, deep-sea sediments and even raindrops. According to a recent study by the Australian governmental agency for scientific research (CSIRO), 14 Mt of microplastics have sunk to the bottom of the oceans, a figure 25 times higher than that suggested by previous studies.

We are now detecting them in the bodies of marine animals, or in tap water, which we end up ingesting ourselves.

While there is no shortage of international initiatives and agreements on plastics, their effectiveness is limited by a lack of coordination. Indeed, while a growing number of countries are trying to reduce the use of plastic objects through bans and legislation, they vary greatly: from the regulation of microplastics (especially those added to cosmetics) in North America, to the banning of plastic bags in many African and Asian countries.

China, followed by other countries, has also banned the import of plastic waste into its territory, which has turned the recycling market on its head.

What drivers should be activated to take action on plastic pollution?

In addition to targeted legislation on plastic bags and single-use plastics, governments can create new markets for recycled materials, remove logistical barriers or implement Extended Producer Responsibility (EPR). Based on the "polluter pays" principle, it holds manufacturers, importers and distributors responsible for their products throughout their life cycle.

In Europe, legislators began working to establish quantitative targets in 2018. Directive 2018/852 on packaging and packaging waste calls for 50% recycling of plastic packaging by 2025 and 55% by 2030. In June 2019, the Single-Use Plastics (SUP) Directive was passed, banning single-use plastic items such as straws and cutlery. In addition, Member States now have a collection target of 90% of plastic bottles by 2029. Bottles marketed in the EU will eventually have to contain at least 25% recycled plastic by 2025 and at least 30% by 2030.

These targets are currently being discussed with the 14 European countries and 40 companies that have signed up to the "European Plastics Pact" in order to follow France’s lead by implementing more ambitious measures.

Adopted on 10 February 2020, the French anti-waste bill for a circular economy aims to transform a linear economy - ‘produce, consume, throw away’ - into a circular economy - ‘reduce, repair, reuse, recycle, reinvent’. It transcribes European regulations, including the SUP directive, into French law but with much shorter deadlines, targeting 30% recycled material in bottles by 2030 and the eradication of single-use plastics by 2040.

Another factor at play is a reform on the extension of expanded producer responsibility (EPR) chains and the obligation to provide information so that consumers can make informed choices, based on reparability and sustainability indices.

In France, the logo on plastic packaging doesn’t indicate that the product is recyclable; it simply means that the manufacturer has paid a contribution to an eco-organization (CITEO)

New challenges for the petrochemical industry?

The environmental challenges posed by plastic pollution and the introduction of new governmental legislation are having a major impact on the petrochemical sector. The plastics industry is now being more openly encouraged to explore new production methods, including bio-based plastics and recycling, which could be used to reduce the fossil content of plastics.

Especially since, in view of the figures, the measures currently required in terms of plastic recycling are considerable. According to a report by Plastics Europe, 32.5% of the plastics collected in Europe were sent for recycling in 2018. Ultimately, recycled plastics accounted for only 9.8% of total plastics consumption in Europe, while recycled paper and cardboard accounted for 85% of total consumption (European Paper Recycling Council 2020 report figures 2019).

The source of the problems associated with plastic recycling lies in its manufacture: to begin with, naphtha, a by-product of the oil-refining process, is heated at high pressure and then rapidly cooled to break hydrocarbon molecules down into their basic molecules, monomers, which are formed of several carbon atoms.

These are then polymerized, i.e. bound together to form polymers in granular, liquid or powder form. Adjuvants and additives, chemical substances (plasticizers, solvents, antioxidants, dyes, flame retardants, etc.) are then added to the polymers, which modify their properties for moldability, weldability, impermeability, transparency or opacity, etc.

There are several dozen different polymers and the formulations obtained by adding additives also vary depending on how they are applied.

Polymers can be categorized into two main families of plastics. Thermoplastics - polyethylene (PE), high density polyethylene (HDPE), polyvinyl chloride (PVC), polyethylene terephthalate (PET), polypropene (PP), expanded polystyrene (PS), polyamide (PA), etc. - these reversibly soften when heated and harden when cooled, which is an advantage for mechanical recycling. In fact, after being collected and sorted, thermoplastic waste can be melted and re-solidified to create new objects. Thermosets - polyurethane (PUR), unsaturated polyesters (UP), silicone, etc. - on the other hand, gradually harden when exposed to heat to reach an irreversible solid state. 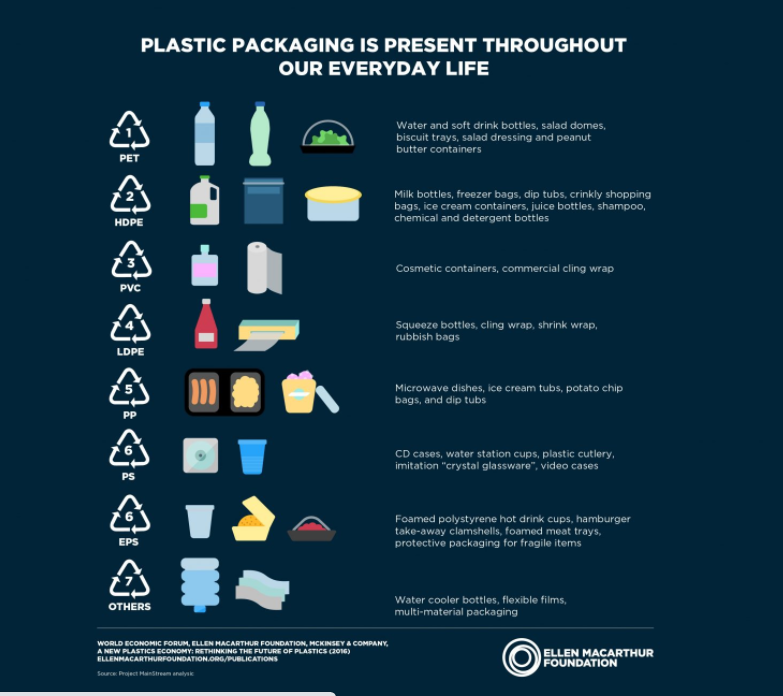 Mechanical or chemical: what techniques are used to recycle plastics?

Currently, 99% of thermoplastic waste is recycled by so-called "mechanical" recycling: after being collected and sorted to obtain deposits separated into "homogeneous" polymer families, the waste is over-sorted, washed, crushed, extruded, transformed into flakes or granules and then reused in the form of recycled raw materials (RRM), or secondary raw materials, without modifying the structure of the polymer.

However, there are considerable limitations to this recycling method. Firstly, the various sorting and separation stages, as well as the regeneration processes required for recycling are complex, due to the diversity of polymeric resins and the external pollution that occurs at the various stages of the plastic's life, from its manufacture to its arrival at the regenerator (contamination from the use of packaging or contact with other materials, etc.).

Secondly, and more importantly, the sorting, washing, grinding and extrusion processes do not remove the internal contamination in polymers caused by the addition of additives. If the plastic waste to be processed is very specific (e.g. clear PET-based plastic bottles), the granules containing polymers and additives obtained after extrusion - i.e. produced in a given format under pressure - can be reused as-is to create further clear bottles. This is known as ‘closed loop’ recycling.

However, this ideal scenario is rarely the case. In fact, the variety of the collected waste leads, even after sorting into polymer types, to granules with additives of various origins (such as color mixtures, for example) which then make it impossible to recreate the initial products. Other applications that are less concerned with the quality of the granules are then considered (such as the production of bin liners): this is known as open-loop recycling.

Finally, there are also the temperature effects associated with the various stages of the recycling process, which can also cause degradation of the Recycled Raw Material (RRM). In practice, this phenomenon limits mechanical recycling in its current form. For example, the recycling of a bottle is limited to 7 cycles, after which the raw material becomes too degraded.

As such, mechanical recycling doesn’t fully meet quality requirements and regulatory objectives. For example, incorporating 30% of recycled plastic in bottles by 2030 would require the availability of very high quality recycled material, particularly for food or cosmetic packaging, and therefore improvements to the efficiency of the methods used to collect, sort and recover RRMs.

>> Chemical recycling in one graphics

Other solutions are emerging, or rather, being brought back to life: developed in the 1990s, chemical recycling is once again attracting the interest of plastics professionals, precisely because of its ability to produce a polymer that can be reused in a closed loop, even for the most demanding applications.

Chemical recycling allows the production of new raw materials by modifying the chemical structure of the polymer and purifying the resulting product(s). It includes the processes of depolymerization and conversion. The first involves going back to the basic monomer by breaking the polymer down through solvolysis (using solvents) or thermolysis (by heating the polymer). The second, which uses pyrolysis or gasification, produces hydrocarbon fractions that are then reused to form (among other things) virgin monomers.

Dissolution processes are also being developed to recover additive-free polymer chains. Although the chemical structure of the polymer remains unchanged and, in this sense, they are an extension of mechanical recycling, these processes rely heavily on chemical stages and are therefore often also grouped in with chemical recycling.

At present, chemical recycling accounts for about 1% of recycled plastics.

The costs of this technology are currently high, which is why some manufacturers prefer to use cheaper virgin plastic for the time being. However, a lot of R&D work is currently being done in this field, which has already led to numerous pilots and demonstrators, giving reason to hope for a growth in chemical recycling over the next decade.

Reducing the production costs of bio-based intermediates and securing access to the resource will be key in rolling out these technologies.

1. Global plastics production currently stands at 360 million tons and could reach 1 billion tons by 2050. 40% of this is plastic packaging.

2. Faced with the increase in plastic waste, the European Single-Use Plastics (SUP) Directive and the French anti-waste bill for a circular economy set ambitious targets: the eradication of the use of single-use plastics, the recycling of an increasing portion of packaging and more recycled plastic in bottles.

3. Achieving these goals will depend on the improvement of the mechanical recycling process by increasing the efficiency of the sorting and recovery of Recycled Raw Materials (RRM), and on the development of economically and environmentally viable chemical recycling solutions. 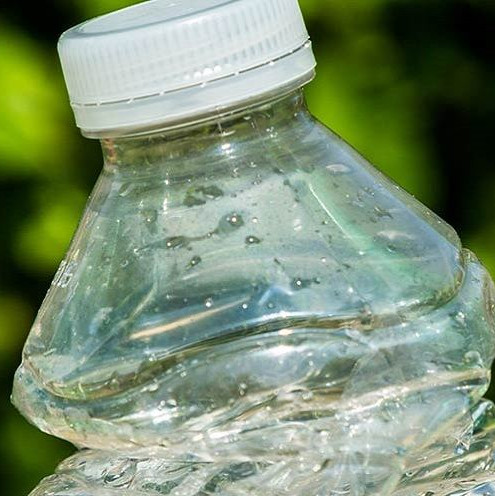 Recycling of PET : Axens, IFPEN and JEPLAN will demonstrate and commercialize an innovative process

Bio-paraxylene production: on the path to 100% bio-based bottles