Energy storage consists in preserving a quantity of energy produced for later use.
The idea is to ensure a balance between energy production and consumption, reduce losses and, hence, optimize costs. 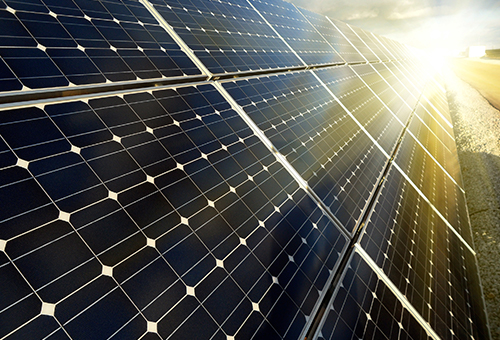 To support the development of renewable energies (solar and wind), the production of which is variable, non-manageable and decentralized, an increase in electricity storage capacities is required. But numerous technical, regulatory and economic obstacles continue to hamper the roll-out of new storage technologies. Hence the significant research efforts under way around the world.

What is electricity storage?

Storage systems can be divided into two categories:

Global stationary storage capacities are estimated to be around 180 GW; i.e. 3% of global electricity capacity.
A land-based wind turbine has a power of around 3 MW on average (source EDF). For a sea-based turbine, the power varies between 4 and 10 MW.

Most of the time, electricity cannot be stored directly. It is converted into another form of energy for storage, and then recovered and converted back into electricity for use.

This storage system is hinged around the principle of gravitational energy.

The 400 PSPPs that exist (almost half of them are in Europe) represent 97% of the world’s installed, large-scale energy storage capacities (source : Electricity storage and renewables: cost and markets to 2030, Irena, 2017).

How does it work?
This system, linked to hydraulic energy, operates on the principle of two water reservoirs situated at different heights and often involves a dam. When a surplus of electricity is produced, water in the lower reservoir is pumped towards the upper reservoir, which is used as a potential energy receptacle. When required, some of the upper reservoir is drained and, by gravity, water is released through a turbine which produces electricity. It is a reversible system combining a pump and a turbine.

The PSPP is a mature technology that nevertheless requires major facilities and a specific geographic context with a gradient between the two reservoirs. While PSPPs are primarily used to make traditional energy generation (hydraulic and nuclear) more flexible, they can also be used in conjunction with large-scale renewable energy facilities; particularly to regulate and smooth out production at large-scale wind farms via the creation of artificial basins.

The major drawback with this system is linked to the large quantities of heat generated during the compression of air and the need to reheat the air when decompressing it, before it is then used to drive the electricity production turbine. Given the energy exchanges required to operate the system, the efficiency of a traditional CAES facility is around 50%.

How does it work?
Air is first compressed via a system of compressors, at very high pressure (70 to 150 bars) for storage in a reservoir (underground cavities, for example). To recover this potential energy, air is decompressed in a turbine that drives a generator. As air is heated during compression, the heat when it exits the compressor can be recovered via exchangers and stored in order to be used to heat the turbine.

A more sophisticated concept making it possible to store both compressed air and heat is currently being developed: Advanced Adiabatic CAES (AA-CAES).

Explanation: a process is said to be adiabatic when there is no transfer of heat with the surroundings.

The idea is to eliminate the two cooling and heating phases that consume outside energy. The advantage of this concept is the capacity to store compression heat for release during decompression and achieve a far higher degree of efficiency (around 70%). The construction of a first demonstration platform forms the focus of the Adele project in Germany.

Compressed air is generally stored in a surface reservoir or in underground saline cavities, depending on the desired storage capacity.
>>  More information 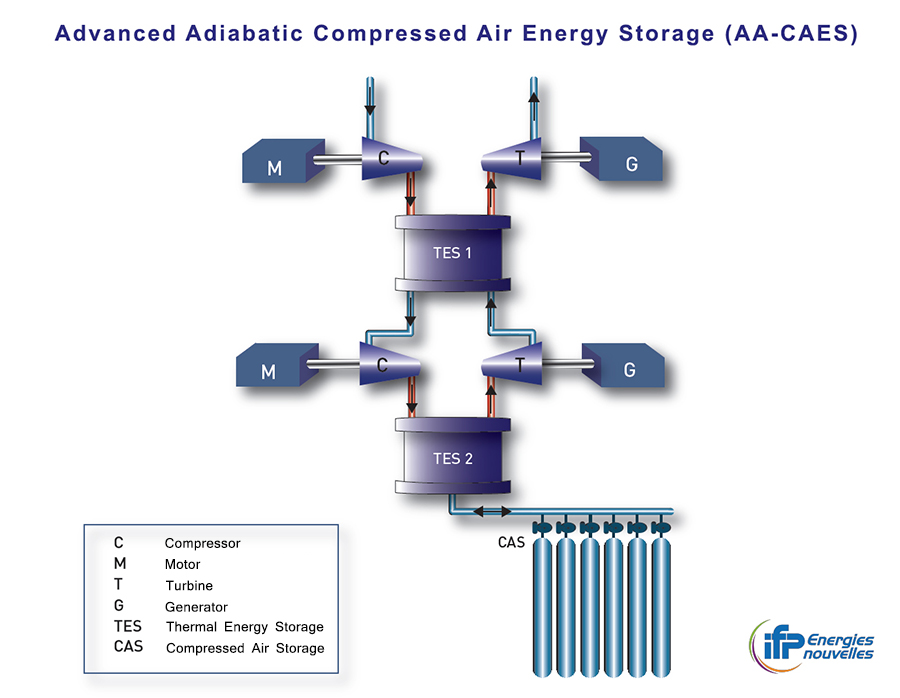 With a smaller capacity (several hundred KW, even a few MW), batteries meet the needs of portable electronics, transport (electric car) as well as some stationary storage applications. Batteries can supply power for a few hours and withstand a certain number of charging/recharging cycles.

In the case of stationary energy storage, they are intended for local use (individual, building, small communities) for photovoltaic self-consumption, micro-grids as well as to complement the development of so-called smart electricity networks

In Australia, Tesla installed the world's largest renewable energy storage system based on lithium-ion batteries with a capacity of 100 MW. It is connected to wind farms and has a storage capacity sufficient to power some 30,000 homes.

How does it work?
Electricity storage is built on electro-chemical reactions whereby ions and electrons are circulated between two electrodes. Chemical composition can vary depending on the technology, giving rise to a broad variety of batteries.

The operation of the lithium-ion battery, the current market standard, is based on the reversible exchange of the lithium ion between a positive electrode and a negative electrode. Such batteries are already fitted in several million rechargeable electric and hybrid vehicles.
R&D efforts are being reinforced in the field of stationary Li-ion batteries of a capacity compatible with temporary renewable energy storage.

R&D in this field is developing very rapidly today and the number of installations is increasing, particularly when it comes to sodium-sulfur systems adapted to stationary storage. Boasting a substantial energy capacity and excellent efficiency, these batteries currently operate at a high temperature (around 300°C), which poses some problems, particularly in terms of life span.

Still at the prototype stage, this type of battery is similar to a li-ion battery. Its principle is the same but its composition is different: sodium is used instead of lithium; it is one thousand times more abundant and therefore cheaper. However, it remains a lower energy solution than the lithium battery, but appears well suited to stationary storage.

These batteries make it possible to store energy in liquids. Electrochemical couples are solubilized in electrolytes moving through an electrochemical cell separated into two compartments by an ion-exchange membrane.

The advantage of this technology resides in its modularity: the battery power (number of electrolyzers) and its energy (quantity of electrolytes) can be dimensioned separately. This technology can become economically profitable for long storage times and large quantities of stored energy.  Electrolytes can also function as heat transfer liquids, thus facilitating temperature regulation, while conventional batteries depend on passive heat conduction, leading to high temperatures inside cells.

New flow-battery technologies based on active organic water-soluble molecules are at the pilot stage of development and should reduce the cost of this technology while using abundant raw materials. 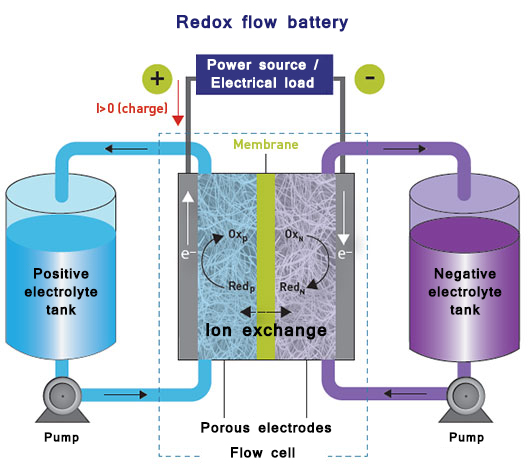 In the event of surplus production (particularly in the case of electricity produced from intermittent renewable energies), the surplus can be used to produce hydrogen via the electrolysis of water. This hydrogen could be stored and converted back into electricity when required, via a fuel cell. But the electricity production costs associated with the process are very high. Accordingly, there is a need to find an appropriate business model for it, within a broader vision of the roll-out of hydrogen.

The MYRTE experimental platform recently installed in Corsica illustrates this principle: it consists of a photovoltaic plant with an installed power of 560 kW connected to an electrolyzer, which converts electricity into hydrogen during off-peak times; this energy is then released via a fuel cell that converts hydrogen and oxygen into electricity during peak consumption times.

What future for electricity storage?

No single process appears to be better positioned than another; each one can meet local or national needs depending on a number of factors (technical aspects, safety aspects, location and proximity to the energy source, surface area taken up, connection to existing network, investment and operating costs, etc.).

For 1 kWh of stored electricity, operating costs are approximately as follows:

These costs remain high compared to average European electricity production costs of between €0.05 and €0.07 / kWh for a natural gas or coal power plant. But, beyond 2025, some competitive storage techniques may reach the maturity stage.

No energy storage business model currently exists, other than for isolated sites. All storage applications are subsidized to varying degrees (more than 50% in the USA).

Any material has the capacity to release or store heat via thermal transfer. The transfer can be:

Heat storage can also be based on thermochemical (or sorption) technology via processes implementing reversible chemical reactions that make it possible to separate a product under the effect of a heat source. The two (or more) components are thus stored separately without thermal loss and the heat is recovered when they are put back together to reform the initial product. The processes implemented here are more complex but applications exist for building air-conditioning systems.

Another option being researched is heat storage connected to thermodynamic solar power plants, consisting in concentrating solar radiation on a receptor making it possible to heat to a high temperature a heat-carrying fluid, which, directly or after storage, will activate a power generator via a turbine. Spain boasts four of the largest solar thermal power plants in Europe: between them, the Solaben, Solnova, Andasol and Extresol plants represent 650 MW of power. Andasol and Extresol have reservoirs containing molten salts that can store more than 1010 MWh of heat, enough to run the turbines on full power for up to 7.5 hours. 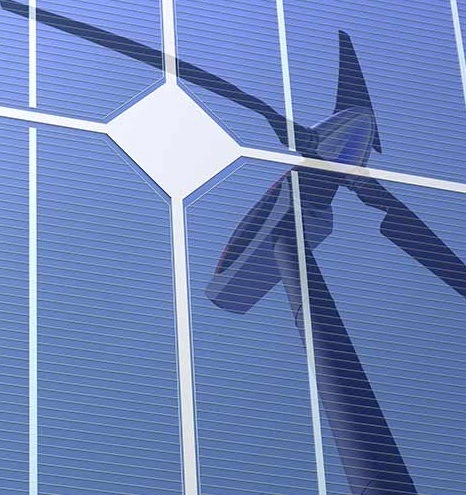