Like electricity, hydrogen is primarily an energy vector produced from another resource. For economic reasons, 95% of it currently comes from natural gas. Some natural sources of hydrogen have nevertheless been observed.

With the increase in the proportion of electricity produced from low-carbon energies - particularly renewable - researchers are currently studying the option of producing hydrogen via the electrolysis of water, for use as part of the energy transition. Mainly used until now in the chemicals and refining sectors, hydrogen may find other applications, such as for electricity storage or as a fuel in the transport sector. 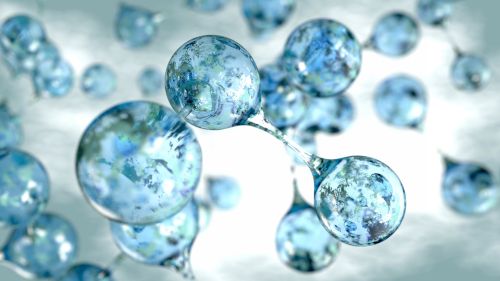 The main sources exploited for di-hydrogen H2 production are water and hydrocarbons (coal, oil and gas).

A single water molecule is made up of 1 atom of oxygen and 2 atoms of hydrogen, as reflected in the formula H2O.

Hydrogen is also found in hydrocarbons, which are produced by a combination of carbon and hydrogen atoms. Such is the case, for example, with methane, or natural gas (CH4), one of the simplest combinations for hydrocarbons.

Hydrogen properties
The di-hydrogen molecule is made up of two hydrogen atoms and is particularly energy-rich: the combustion of 1 kg of hydrogen releases roughly three times more energy than 1 kg of gasoline does, only producing water in the process. Conversely, on an equal mass basis, hydrogen occupies a bigger volume than any other gas. Thus, in order to produce as much energy as 1 liter of gasoline, it takes between 6.4 and 7 liters of compressed hydrogen at 700 bars (700 times atmospheric pressure).
Hydrogen is extremely light, a characteristic that is a drawback for its storage and transport. Generally speaking, bottles or pipelines are used to transport it in compressed form. The liquid form (at a temperature of - 253°C) is far more expensive.

Hydrogen also exists in the natural state. The first natural sources of hydrogen were discovered on the seabed in the 1970s, with further land-based discoveries made more recently. But there is still a long way to go before the viable use of hydrogen in this state can be envisaged. Further progress is required in terms of knowledge concerning the origins of the formation of this hydrogen, along with research on profitable production techniques.

Located deep underwater and a long way from coasts, extracting hydrogen from beneath the ocean bed is uneconomical. More recently, land-based hydrogen seeps, which are easier to access, have been identified in two types of geological environments:

Definitions
Peridotite : rrock derived from the Earth's mantle, consisting mostly of olivine (up to 90%) and pyroxenes (ferromagnesian minerals). These minerals contain reduced iron, which oxidizes upon contact with water to produce hydrogen. Peridotites are exposed in some places on the surface of the deep sea floor. Surface outcrops have also been found in particular tectonic environments.
Intraplate region: area located in the interior of a tectonic plate as opposed to an area at a plate boundary. Here, interactions with the Earth's depths are more limited than those at the plates' boundaries. These areas contain the oldest parts of the continents, cratons.

«Today, 95% of hydrogen is produced from hydrocarbons (oil, natural gas and coal), the most profitable solution. However, this process emits CO2, a greenhouse gas. Industrial players are increasingly examining the possibility of producing hydrogen via electrolysis using low-carbon energies. But the obstacle remains the associated production costs, which are considerably higher than those of reforming.»

The current use of hydrogen

There are currently two principal uses of hydrogen:

By way of comparison, global energy consumption in 2017 was around 13,800 million tonnes of oil equivalent (Mtoe) (all energy is stated in terms of the energy capacity of a tonne of oil); hydrogen therefore represents 0.4% of this quantity in terms of mass, but 1.2% in terms of energy (1 tonne of Hydrogen equates to 2.86 toe in heat equivalent).

This hydrogen is transported via a relatively extensive network of pipelines; a total of more than 4,500 km in the world, including 1,600 km in Europe and 2,500 km in the USA.

Hydrogen in the energy transition

Hydrogen and the challenges of the energy transition

These two challenges are inextricably linked with:

The production of green hydrogen is not yet a reality. A transformation of energy systems as well as the technical / economic context will be required to bring it about.

The use of low-carbon hydrogen

Generally speaking, 4 options for the use of low-carbon hydrogen can be identified:

Conditions required for the roll-out of low-carbon hydrogen

The large-scale roll-out of hydrogen is unlikely before 2030. The challenges are multiple:

A national plan for hydrogen in France
The French law relating to the energy transition for green growth set an objective of 32% renewable energies in final energy consumption and 40% renewable energies in electricity production by 2030. The law also stipulates a 30% reduction in fossil energy consumption by 2030 and that the gas sector should be decarbonized by 10% by the same year. Hydrogen represents a lever of interest in order to achieve these objectives.
On 1 June 2018, the French government thus launched a Hydrogen plan aimed at supporting its deployment within the context of the energy transition. The objective as set out in the plan is that 10% of hydrogen production should be from renewable sources by 2023. The “Long-term energy research program” (PPE) draft legislation published in January 2019 also sets this objective. In 2019, €100 million will be dedicated to the development of production and transport technologies across the country.