Oil is a fossil energy and a resource that is limited on a global scale.
What is oil made of? How is it extracted? What is it used for? A review of the fundamentals 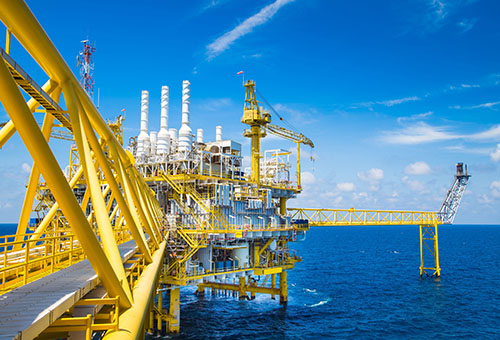 What is oil made of?

Oil is a mixture of hydrocarbons (molecules composed of carbon and hydrogen atoms) and other molecules, also containing other atoms, primarily sulfur, nitrogen and oxygen. At ambient temperature and pressure, some of these constituent elements are in gas form (methane, propane, etc.), some are in liquid form (hexane, heptane, octane, benzene, etc.) and some are in solid form (paraffins, asphalts, etc.). Oil contains thousands of different molecules that have to be separated into fractions and chemically converted to obtain products that can be used.

How is oil formed?

Oil is the result of the thermal decomposition of organic matter contained in specific rocks: source rocks

This matter includes the fossilized remains of aquatic and terrestrial plants, bacteria and microscopic animals accumulating at the bottom of oceans, lakes and deltas. Known as “kerogen”, these organic residues are preserved in environments where water is deprived of oxygen, thereby combining with mineral sediments to form the source rock.

Additional sediments will continue to accumulate over tens of millions of years, taking the source rock to considerable depths.

Generally at depths of between 2,500 and 5,000 m and under the action of the high temperatures found at such depths, kerogen is converted (via thermal cracking) into liquid oil accompanied by gas. At depths in excess of 5,000 m, further cracking takes place, converting the oil into gas.

Lighter than water, the oil and gas migrate upwards, accumulating in porous rocks (reservoir rock) where they are confined when below impermeable rocks (cap rock).

If there is nothing to stop them, they escape to the surface. When this happens, oil “seeps” are created (used in ancient times and described by Marco Polo), as found, for example, in the Middle East, Venezuela and even in France. Already known to the Romans (Puy de la Poix, Allier, near Clermont-Ferrand in central France), this seep has been active for at least 2,000 years.

Concerning gas seeps, the most famous is the “Fontaine Ardente” south of Grenoble, described by Saint Augustin in the 4th century and classified as one of the 7 wonders of the former French province of Dauphiné.

When they rise to the surface, oils and gases can encounter faults or folds (see figure below) forming “traps” in which considerable quantities of oils and gases can accumulate. It is these accumulations that oil explorers look for and when significant enough, they become exploitable fields.

The extraction of shale oil
Produced in the source rock, a not insignificant proportion of the oil can remain trapped there. Since source rocks are not very porous and impermeable, extracting the oil requires the use of “stimulation” techniques whose environmental footprint is far from neutral: horizontal drilling and hydraulic fracturing techniques. Today, shale gas accounts for half of total oil production of the USA.

Definition
The source rock is a clayey rock with a foliated appearance.

Oil, what is it used for?

In the 1950s, oil became the world’s primary energy source. It meets more than 30% of global energy needs.

It is the principal raw material contained in the fuels used by the transport sector (cars, trucks, planes).

It is also an essential raw material for the petrochemicals industry since it is used for the manufacture of numerous everyday products: plastics, paints, dyes, cosmetics, etc.

Lastly, oil is also used as a home-heating fuel and a source of heat in industry, but to a lesser extent; it only accounts for 4.6% of global electricity production, since there are a number of other electric energy sources (nuclear, coal, gas, hydraulic, wind)

How is oil found?

Oil exploration begins with the identification of clues indicating the potential presence of oil in a given location and the likely quantity. Geologists and geophysicists collaborate in this painstaking process in which the economic stakes are high, an investigation that starts at the surface and descends deep underground.

This is the first step aimed at identifying sedimentary zones worthy of investigation (folds, faults, etc). Geologists use aerial photographs and satellite images and then go out into the field to examine outcrops. The latter can provide an indication of the structure deep underground. Next, the laboratory analysis of rock samples taken makes it possible to determine the age and nature of the sediments in order to identify the most promising zones. This step in the process accounts for 5% of the exploration budget.

Geophysics or study of the deep underground environment:

The objective: provide as much information as possible to ensure subsequent drilling operations have the maximum chance of success. The aim is also to accumulate useful seismic data, with the help of an"ultrasound" of the underground environment or "seismic reflection". These data are obtained using pneumatic vibrators (or other) that generate mini shocks underground. The signals sent to the surface are processed by powerful calculation software tools that recreate an image of the underground environment. Possible traps revealed are ranked according to their probability of existence and potential volume. This step in the process accounts for 15% of the exploration budget.

The exploration drilling phase is the only one that validates for certain the presence of oil. The rock is pierced with a drill bit. On land, the equipment is operated from a drilling mast. At sea, the drilling equipment is supported above the water by a specially designed metal platform. The cost of exploration drilling varies between €500,000 on land, to €15 millions for sea wells. This step, lasting between 2 and 6 months, accounts for most of the exploration budget: 60% on average.

Before considering production, the field’s profitability must be evaluated: the volume of recoverable reserves and production conditions can only be determined by conducting delineation drilling operations to define the outline of the field. Multidisciplinary teams made up of geologists, geophysicists, oil architects, drillers, producers and field engineers are responsible for studying the results from the exploration phase. Their conclusions are crucial to minimizing the financial risks oil companies are exposed to.
The fact is that only one in five exploration drilling operations reveals a quantity of oil that economically justifies the field’s development.

How is oil extracted?

The field development phase requires the presence of all the necessary equipment: production drilling or “development well”, installation of production, treatment and metering equipment and oil transport system. This phase, representing between 40% and 60% of a project’s total cost, takes between 2 and 3 years.

Where are oil fields located?

Around 30,000 profitable fields exist, ranging in area from a few dozen to a few hundred km2. Of these, between 450 and 500 are categorized as “giant” fields (with reserves in excess of 70 million tonnes), and some sixty of these are “super giants” (with reserves in excess of 700 million tonnes). These fields are not uniformly distributed: 60% of the “super giants” are in the Middle East and represent 40% of the world’s proven reserves.

2/3 of the world’s oil reserves are concentrated in the Middle East.

Insofar as oil is not a renewable energy, the evaluation of reserves is of crucial importance. Reserves correspond to recoverable oil volumes within the context of current technical and economic conditions in fields where production activities are taking place or are going to take place.

Proven reserves are the quantities of oil for which the existence has been established and for which the probability of recovery within the context of available data, extraction techniques and economic conditions is at least 90%.

On average, only 35% of the volumes of oil contained in fields can be recovered. An improvement in extraction techniques may lead to an increase in reserves; techniques that, with a high barrel price, may become profitable.

Offshore sedimentary basins located in less than 500 meters of water represent more than 30 million km2, i.e., an area equivalent to that of Africa. It is in these waters that most of the world’s current production reserves are located (30% of global production, 20% of reserves). Offshore production is thus crucial to energy supplies.

Major technological progress has been seen in the area of ultra-deep water (> 1,000 m of water) production. Nevertheless, this production remains highly complex and costly, and, even today, continues to be technologically challenging, with increasingly complex exploration targets lying at ever greater depths.

In 2017, offshore oil production was 27 Mb/d, i.e., 29% of global production.
The biggest producers are Saudi Arabia, the USA and Russia.

How is oil transported?

Since production zones are geographically concentrated, they are often located a long way from consumption zones to which the oil has to be transported, by tanker or pipeline.

Crude oil is not used in its original state, it is converted into various finished products: fuels, combustibles, raw materials for the petrochemicals industry and other specific products (bitumen, lubricating oils).

This is where refining comes in: providing consumers with high-quality products that comply with specific standards - particularly environmental -, in line with the quantities required by the market. This step involves different operations: