Sailing boats, windmills, etc. Humans have made use of wind energy for centuries. Thanks to technological progress, today it is possible to produce “green” electricity without using fossil resources. We take a closer look at its development prospects. 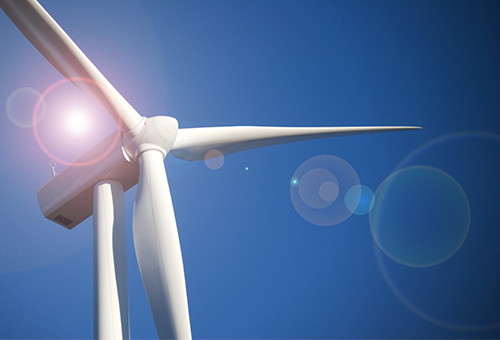 A wind turbine is a machine used to convert kinetic energy from the wind into mechanical energy, in turn converted into electricity. When several wind turbines are installed on the same site, this is called a “wind park” or “wind farm”.

The first wind turbines used to produce electricity date back to the 1970s. In France today, wind power is the second most used renewable energy source behind hydropower. It supplies almost 5% of national electricity requirements.

HOW DOES A WIND TURBINE WORK?

Wind energy is produced thanks to the force exerted by the wind on the blades of a rotor.

The rotor generally has 2 or 3 blades rotating around a horizontal axis. The sweep diameter of these blades ranges from 80 to almost 200 meters. The longer the blades, the greater the electricity production capacity.

As they rotate, the blades drive a generator that produces electric energy. A multiplier is often installed between the rotor and the electric generator, since the latter requires a rotation speed of 1000 to 2000 rotations per minute (rpm), whereas the blades turn more slowly (10 to 25 rpm). Recently designed variable rotation speed systems are often direct drive turbines and therefore do not have a multiplier. The assembly composed of the blades, the rotor, the multiplier and the generator forms the nacelle. 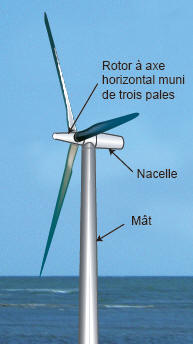 The nacelle is installed at the top of a tower that is between 50 and over 100 m high. A rotation system turns the rotor and blades so that they are always facing into the wind. Wind turbines generally operate at wind speeds of between 10 and 90 km/h. Beyond this maximum speed, they stop automatically to avoid any accidents.

The electric energy produced by the generator is transported down the tower via cables to a transformer, before being injected into the electricity grid by underground cables.

Two wind power sectors have developed in parallel with one another: land wind turbines, currently the most numerous and the most mature, and offshore wind turbines, installed in the sea, where the wind is more powerful and more regular.

Europe has been a pioneer in the development of wind energy and is still the second-placed region in the world in terms of wind turbine growth. France is ranked 3rd in Europe, behind Germany and Spain. On a worldwide scale, China and the USA have the biggest wind farm sectors.

However, the potential of wind power on land is limited by:

Offshore wind power has been taking off in the past few years. Larger and more powerful (6 to 10 MW, or even 12 MW for some models to come), wind turbines installed in the sea supply more energy per machine than wind turbines on land. They have a limited impact on the landscape, making it possible to have larger wind parks, with more turbines.

There are two types of offshore wind turbines depending on their location:

ADVANTAGES AND CHALLENGES OF WIND ENERGY

The future looks bright for wind energy. It uses a renewable resource (the wind) and its operation does not produce any greenhouse gases. In Europe, the installed power capacity supplies the electricity needs of some 10 million people and avoids the production of 24 million tonnes of CO2 per year. Offshore wind turbines offer some interesting development prospects despite their still high costs.

However, a number of challenges are yet to be addressed, including: