What future for biofuels?

How are they produced? What are their advantages? Will they be in widespread use in the coming years? From current biofuels to those of the future: panorama of progress in this field.. 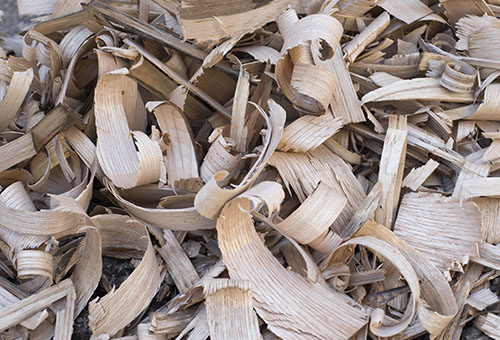 Alternative fuels have a number of advantages:

Powered almost exclusively by oil-based fuels, the transport sector is responsible for one quarter of the planet’s CO2 emissions.

They are incorporated, to varying degrees, in virtually all liquid fuels used in cars: SP95, SP98, E10, E85, etc. They can be used in both gasoline (bioethanol) and diesel (biodiesel) vehicles. They are also of interest to the aviation sector as fossil kerosene substitutes.

"Good idea, but we might need to process them a little all the same!"

Biofuels already in our tanks!
Around the globe, biofuels are distributed at the pump, mixed with engine gasoline and diesel fuel. Proportions can vary depending on the countries and local regulations.
In France, biodiesel (in the form of FAME (Fatty Acid Methyl Ester)) can be incorporated in engine diesel in proportions of up to 7%, or even up to 30% for some captive vehicle fleets (company vehicles, local authority vehicles, etc.). Bioethanol can be incorporated in gasoline in proportions of between 5 and 10% for standard vehicles, and in much higher proportions (up to 85%) for flex-fuel vehicles.

These biofuels are produced on an industrial scale. The can be divided into two families:

This is alcohol produced via the fermentation of sugar derived from plants (beetroot, sugar cane) or starch extracted from cereals (wheat, corn). In Europe, it is either used in the form of alcohol, or it is converted into ETBE (Ethyl tert-butyl ether), before being added to gasoline. The conversion is via the reaction of ethanol with isobutene, an oil product. Bioethanol is primarily produced using local resources: sugar cane in Brazil and corn in the USA.

It is produced from oil-containing plants (rapeseed, sunflower, soybean, palm), which undergo a chemical conversion process. Oil is reacted with methanol to obtain FAME (Fatty Acid Methyl Ester), with properties close to those of diesel. In 2019, FAME can be incorporated in diesel in proportions of up to 7% vol. (B7) or 10% vol. (B10). Another option consists in hydrotreating these oils to obtain Hydrotreated Vegetable Oil (HVO), which can be directly incorporated in engine diesel in any proportion. 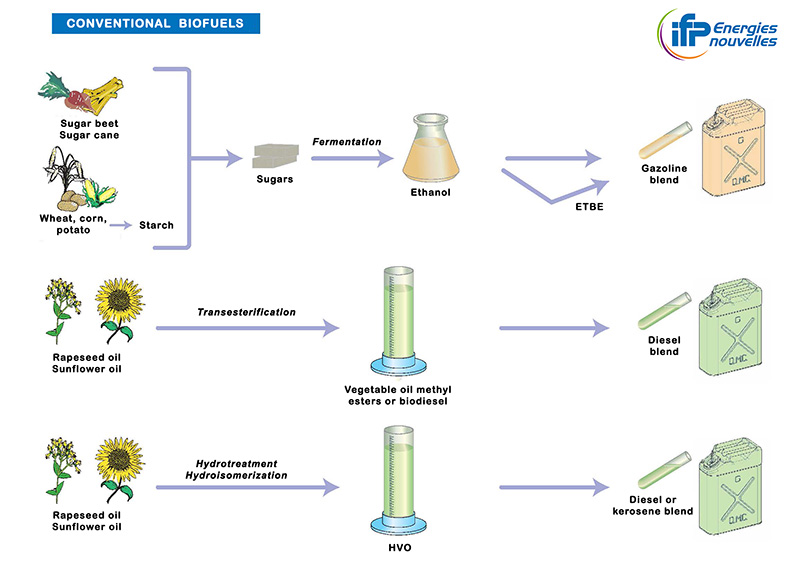 But these conventional biofuels can only be produced in limited quantities, to the extent that they are derived from food resources. In 2015, the European Union decided to set a maximum incorporation limit in fuels of 7%. So the focus then shifted to finding new raw materials, resulting in advanced biofuels.

Advanced biofuels use plant matter (lignocellulosic) that is different from that used by conventional biofuels: agricultural waste, forestry residues, dedicated crops such as miscanthus.

While the production processes involved are more complex, these biofuels boast a number of advantages:

Advanced biofuels can also be divided into two families:

Destined for use in gasoline engines, it is produced using biochemical processes. As is the case with the conventional process, ethanol is produced via the fermentation of sugars. But this time, the plant source does not provide a sugar that can be used directly.

There are two challenges associated with this production process:

BtL (Biomass to Liquids) technology, or thermochemical conversion, is used to produce biodiesel and biokerosene, the latter being an alternative to jet fuel for the aviation sector.

The biomass is first prepared to make it uniform using pyrolysis and torrefaction techniques.

Gasification then takes place at a temperature in excess of 1,000°C in the presence of steam or oxygen. A synthesis gas is then obtained made up of carbon monoxide (CO) and hydrogen (H2).

The synthesis gas is purified: compounds such as sulfur, metals and carbon dioxide (CO2) are removed.

Once the undesirable compounds have been removed, the next step is Fischer-Tropsch synthesis, a reaction that converts the purified synthesis gas into synthetic diesel and kerosene using catalysts.

Improvements are under way to adapt BtL technology to a broad range of biomass and optimize the technical and economic performance (investment, yield, matter, etc.) as well as the environmental (energy consumption, CO2 emissions) performance in order to move on to the industrial phase.

And what about biofuels from algae?

Producing biofuels from algae is an appealing prospect but one that is still at the laboratory experimentation stage. The idea is to recover the triglycerides contained in algae to convert them into biodiesel or biokerosene. This requires control of the entire chain of technologies and their integration, which is far from being the case today.

The production process for these biofuels is broken down into four steps:

According to current estimates, production costs are far higher than those of advanced biofuels (more than 300 dollars per barrel).

To reduce costs and consider large-scale production, a number of major scientific and economic challenges still have to be overcome. Today, algae are only used as raw materials for high-added-value applications and in small quantities, particularly in the cosmetics industry. 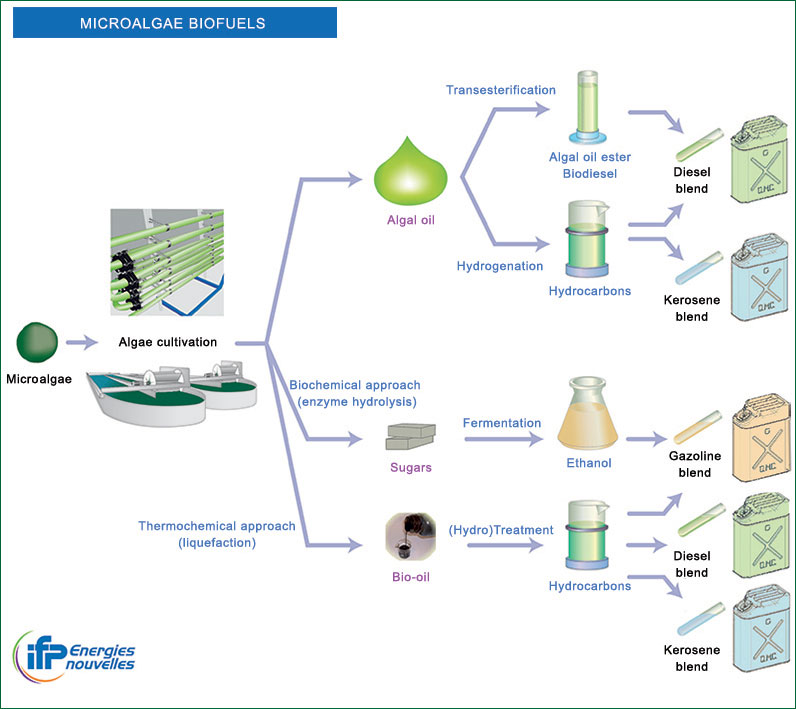 Are biofuels good for the environment?

To determine the environmental footprint of a biofuel, it is necessary to take into account every production step, from cultivation of the plant (fuel consumption of agricultural machinery and fertilizer and water use), through to its end use in a vehicle, via its actual manufacture.

However, the footprint varies significantly by biofuel, depending on:

For example, if we consider bioethanol production processes based on agricultural resources currently available on the market, the best environmental result is obtained from sugar cane. Cane requires few inputs and the bagasse (fibrous sugar cane residue) can be used to generate the heat required for the distillation step. Conversely, if coal is used for the distillation step, the environmental footprint will be significantly penalized.

Advanced biofuels have environmental footprints associated with greenhouse gas emission savings of between 80 and 90% compared with fossil references. This is because the steps involved in mobilizing the resource emit few greenhouse gases, or even, where waste conversion is concerned, none at all.

When biofuels are rationally exploited, the environmental footprints are largely positive and greenhouse gas emissions reduced relative to standard oil-based fuels. In the countries where consumption is highest (USA, European member states, Brazil), only biofuels that are compatible with sustainable development are promoted. Moreover, Europe has introduced certification with, in particular, criteria concerning greenhouse gas emission reductions compared to the fossil reference. The saving required compared to the fossil reference is more than 60% for new units commissioned after 1 January 2021.

Biofuels… at what price?

Today, in the main, they cost more to produce than gasoline and diesel. The additional cost (excluding taxes) is primarily dependent on the price of the resource - particularly oil for the biodiesel sector -, as well as labor costs in different countries.

American bioethanol is currently closest to being competitive with gasoline.

Hence, in the majority of cases, the marketing of biofuels requires support from the public authorities: sales tax exemption, direct or indirect support for raw materials production or investment in manufacturing units, obligation to incorporate a given proportion in fuels, etc.

Finally, in Europe, the euro/dollar rate has an impact on the appeal of biofuels since oil is quoted in dollars and biofuels are sold in euros. Hence a strong euro relative to the dollar reduces the competitiveness of biofuels.

The new sectors should pave the way for a reduction in operating costs, but before being competitive they have to follow their industrial learning curve. Hence, for a few years yet, public incentive policies will be required to support their deployment and encourage industrial players to take the investment risk.

Biofuels on board our aircraft?

Globally, air traffic accounts for around 11% of total fuel consumption. But with the steady growth in traffic, this impact could double over the next 15 years. The sector’s players have set ambitious objectives concerning the reduction in CO2 emissions. Biofuels are one of the avenues being explored. The idea is to replace a proportion of the kerosene of fossil origin, which currently accounts for 100% of the aviation sector’s needs. Their use would reduce greenhouse gas emissions by between 50 and 90% compared to existing kerosene.

Currently, five products are certified for incorporation in kerosene, in proportions of up to 50%. The use of these biokerosene fuels poses no technical or safety problems, and numerous test flights have already been carried out. But their large-scale deployment is hampered by the lack of minimum incorporation requirements, the absence of tax on this kerosene and the complexity of implementing regulations on an international level. For the time being, therefore, their use remains very limited on regular routes.

The use of biofuels in the aviation sector can reduce greenhouse gas emissions by between 50 and 90% compared to existing kerosene. 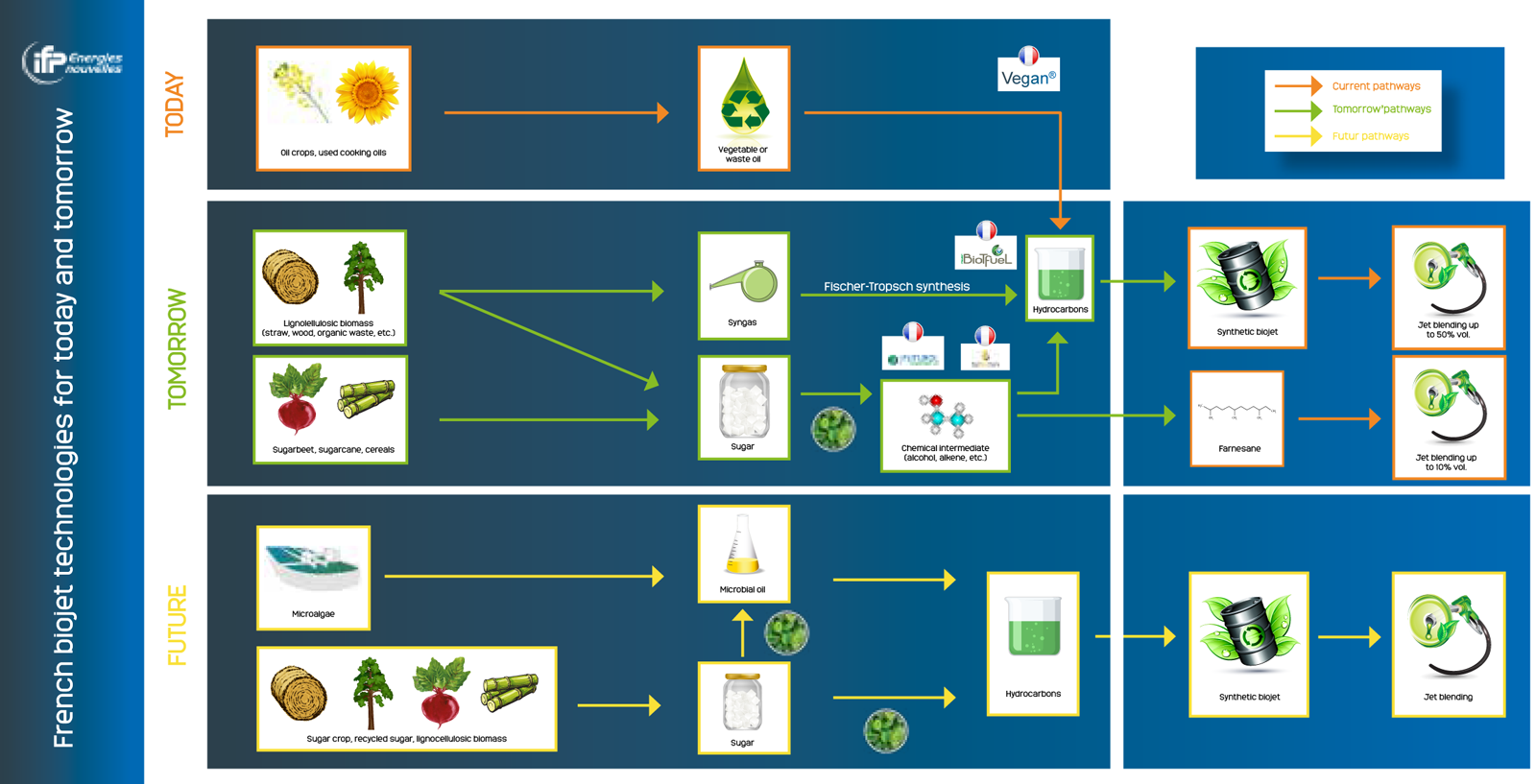 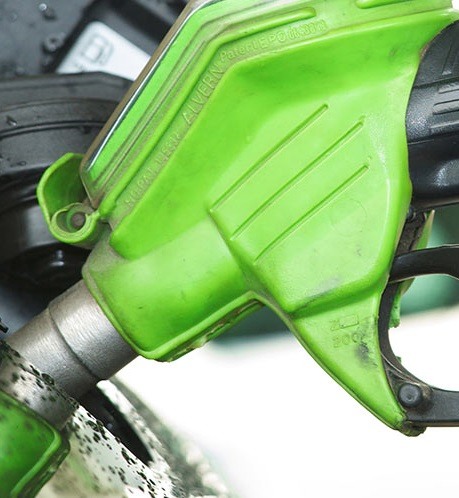 "Advanced biofuels: what future do they have in transportation?" - Summary